The 394 km train ride from Bucharest to Deda is over 7 hours long. With the last 40 km, that go along the Mures Gorge, needing 70 minutes. We got on our bikes at around 6:30 pm, with only a couple of hours of biking for this first day. 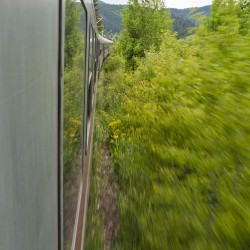 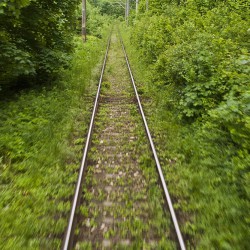 After a tarmac section we left the comfort of civilization behind and entered the Calimani Mountains. We first climbed on Rastolita Valley, turning then on Tihul Valley. We were using a road built for a new dam project – in a few years, a part of this valley will be underwater. During a brief chat with one of the security guys there, he asked us if we had a hatchet with us. “A hatchet? Why would mountain biking on steep terrain with a hatchet anywhere nearby would be a good idea?” I thought. “For the bears” he continued. This raised even more questions in my head: “Are bears scared of hatchets? If not, then do you attack a bear with it? Do people here attack bears with hatchets? I didn’t know I had to refresh my hatchet bear wrestling skills before this trip. It’s ok, I got my trusty multi-tool. In case of bear, I’ll improvise with that.”

We continued up the valley until it started getting dark. We then found a clearing and started assembling the tent. All was going as planned until Alex noticed he forgot the tent pole at home. This basically meant we were without a tent – with one week of mountain biking in front of us. For this first night, we had a deserted barely-standing cabin in the clearing we stopped in. With crumbling walls and surrounded on all sides by stinging nettles, it was our best (and only) option for the night. We slept in the room that looked the most solid – the stable. 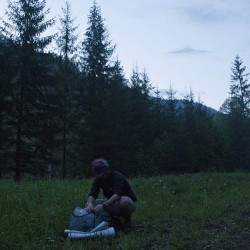 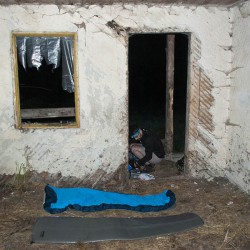 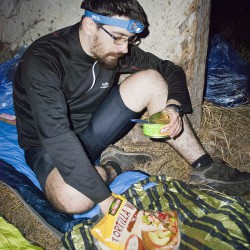 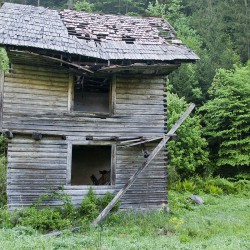 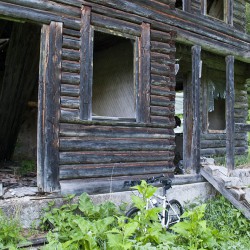 Day 2. This was a long and slow day. We continued up the valley until the road ended. We carried on climbing up on a creek until we finally got to the ridge at a place called Curmatura Tihului. 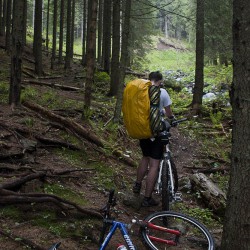 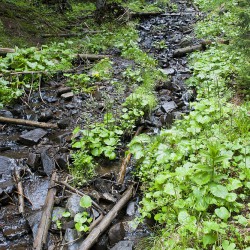 Yes, that’s our way up

I was expecting the ridge to be pretty bikable. It wasn’t. There were a lot of steep and rocky sections. The fact we both had big backpacks didn’t help with our technique. So we mostly pushed our bikes. The weather was cloudy and we were pretty exposed – no shelter whatsoever anywhere in reach. Yet, we only got a few drops, while seeing rains in the areas around us. Lucky!

A mention about the ridge trail – also known as Via Maria Theresia. The guys from Tasuleasa Social have done a very nice job with the poles and the historical panels planted in key places, providing info about the places you’re visiting. They’re hoping to boost tourism, raise awareness about the beauty and the fragility of these areas and help in conserving them. Unfortunately, even in the remoteness of the mountains there’s no escaping from human stupidity, in this case in the form of ultra-nationalists, covering up with paint texts in Hungarian. 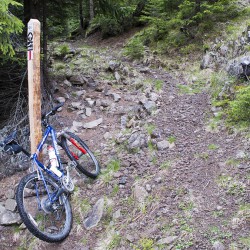 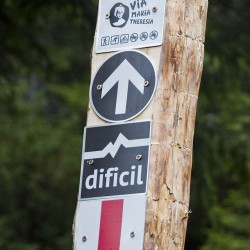 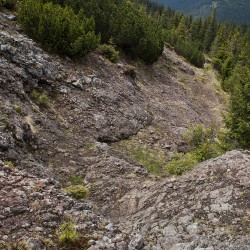 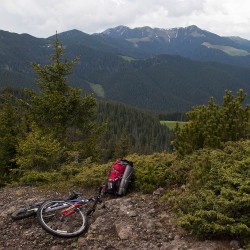 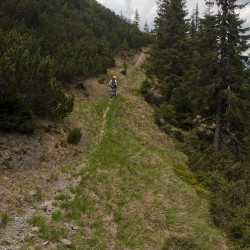 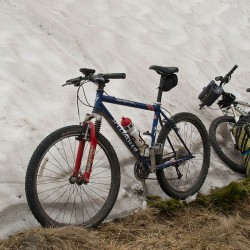 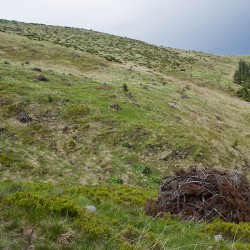 This used to be a forest 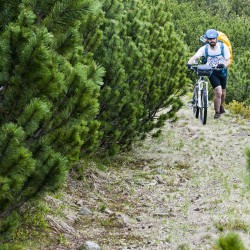 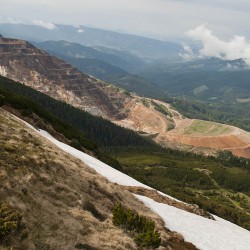 Remains from the sulfur exploitation 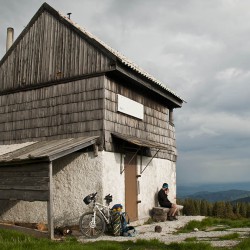 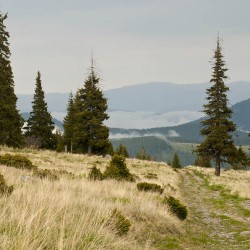 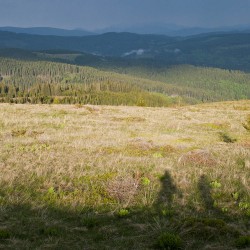 Travelers in the sunset

Near the old sulfur quarry (read more about the quarry here) we got back to a bikable road and we were able to speed things up. But we weren’t fast enough to get back down the mountains, so, as the sun was setting, we had to look for a place to camp. We didn’t have a tent, so we approached a sheepfold. Naively, we left our bikes on the road and went by foot. “Hey, look, they have a doggie! Hey doggie!” “Look, 2 dogs, 3, … 7! Dude, they’re surrounding us!” Eventually, after a heart attack, almost getting eaten alive and 2 minutes, one of the shepherds came and rescued us. By “came” I mean gently strolled our way, with a relaxation that was on the opposite spectrum of our near-death experience. “It’s good you didn’t run. They would have ripped you apart.”

For the rest of our time there, we stayed in the pen surrounding the main shack. The dogs were all around the pen, either barking at us or dozing. If we needed to pee, we had to ask one of the shepherds to accompany us. When one of the dogs noticed a broken board and got inside the pen, we locked ourselves in the shack. There I saw a hatchet. “Hmm, does this scare dogs away?” Took it and got out of the shack, with my mean face on. The dog was not impressed, so I scurried back inside and locked the door again.

We spent the night there. The guys gave us all the cheese and milk we could eat. We also had the chance to see how life is at a sheepfold. They wake up at 4 am. After a couple shots of țuică (it seems you need strong alcohol on an empty stomach in order to get things started), they move on to milking the sheep and cows, in total a few hundred animals. After that, they take the animals out for grazing. They milk them again in the evening, after which they process the milk and prepare the cheese. They go back to sleep at midnight. Every couple of days they take milk and cheese down the mountain with a jeep. They get about 0.40 RON per liter of milk – which ends up at around 4 RON in a supermarket. Half the milk money they get is spent on gas for the jeep. 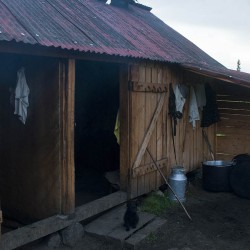 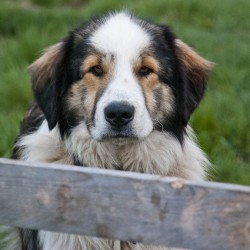 Little doggie, probably picturing himself chewing on my neck 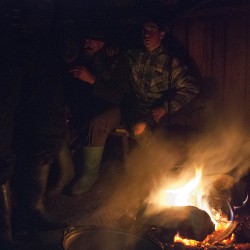 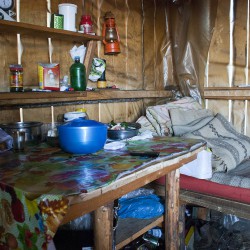 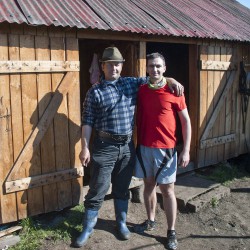 Day 3. We descended the mountain, starting with a trail next to an electrified horse fence. Tried it out (curiosity) and it does pack a punch. Got lost in the maze of forest exploitation roads, but eventually made our way down the mountain and back to civilization. 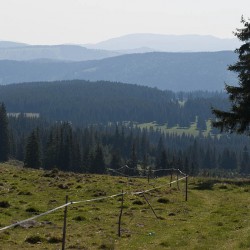 Descending near the electrified horse fence 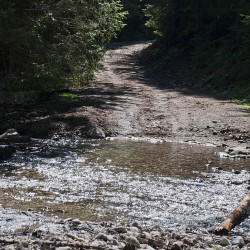 One Reply to “MTB Holiday – Calimani”