Descended in Ciunget and stopped at the village pub. All tables were full of happy (as in drunk) clients, but it wasn’t such a big deal, we weren’t planning on staying a lot. It was already 5 PM and we still wanted to climb up Capatanii and find a decent place to sleep (sheephold or similar). 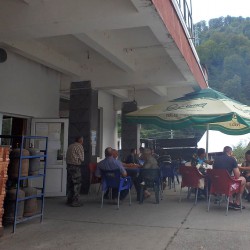 At the village pub in Ciunget 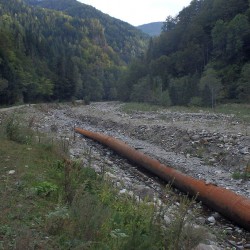 This used to be a stream, now it’s a micro-hydropower plant

The road up Capatanii wasn’t as good as the ones before. Steeper, more rugged. You could easily see that it had been periodically destroyed by floods. Our progress wasn’t very good and it looked like we would have to climb at night. Then a jeep stopped by. Nea Ion, one of the happy clients from the pub in Ciunget, recognized us and offered us a ride and shelter at his sheephold. Great timing, right?

I sat on the passenger seat and Alex in the cargo bed, next to the bikes. I saw right away Nea Ion was a little drunk. Just 500 meters after he took us, he stopped at some wood loggers shed and drank a little tzuica with them. 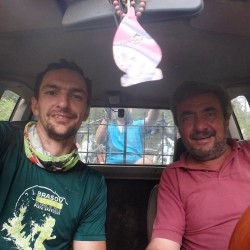 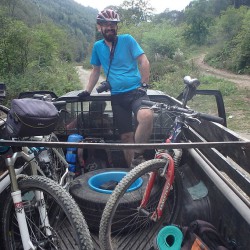 Alex, unaware what was to come 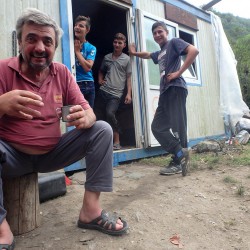 A little tzuica to make the ride more smooth 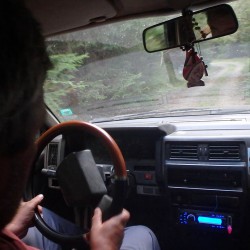 With Arsenie Boca nothing can go wrong 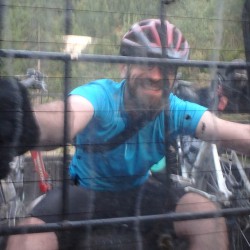 Alex with a forced smile

We continued up the road. Nea Ion told me about the floods here, about bear encounters, about his life as a shepherd and the mountains he grew in. Ah, yes, and how I shouldn’t be afraid of him driving drunk. That he always drives drunk on this road, that he knows it by heart and he’s driven it a lot of times, even at night. At first I wasn’t afraid, but when somebody tells you 10+ times to not be afraid, I guarantee you’ll start being afraid. 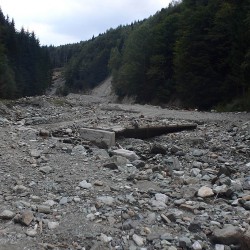 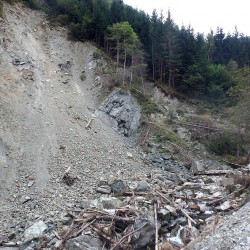 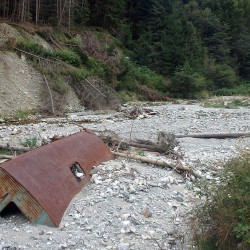 People used to live there

Nea Ion stopped many times to show us sights and let us take photos. And each time he started his car again, his car MP3 player would play the same songs again. First came Andra (yes, Andra Maruta). I don’t remember the song, I’m guessing because my brain activated some sort of inner protection mechanism against stigmatizing memories. The second song was about a nearby mountain. I remember its lyrics (and how simple life must be when you’re 7 years old):
Tarnov, Tarnov, dear mountain, Tra la la lalalalalala
With your fir forests, Tra la la lalalalalala
And your beautiful peak, Tra la la lalalalalala
Your plateau has broken my heart, Tra la la lalalalalala

Meanwhile, Alex was probably not having a good time in the cargo bed. He eventually tied the bikes, so he could then use both his hands to hold onto the jeep and not fall off.

Several road sections were very steep, at a level I can’t even bike down on. I wouldn’t have believed it’s possible for standard cars to climb those if I didn’t see it myself. That Nissan (Nea Ion’s “German car”, as he referred to it) was built like a tank and climbed everything in style. Well, up to a point where its left wheels entered a trench and the car banked dangerously. “Don’t be afraid” Nea Ion reassured me with a drunken slur. Why should I be afraid of: the left hand side ditch the car was in or the right hand side cliff? Nea Ion backed the car up and out of the ditch, stopping ridiculously close to the edge of the cliff. Mastery or luck, I will never know.

The sheephold was quite small. No sheep, just a dozen cows, some pigs and one huge dog. Do you know the kind of dog that barks from a distance, but when you get close becomes very friendly and cuddly? This dog wasn’t like that. Fortunately, the first thing nea Ion did was instruct the dog that we were not food. Then he told us to boil a pot of water, while he went to milk the cows. 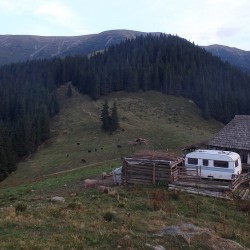 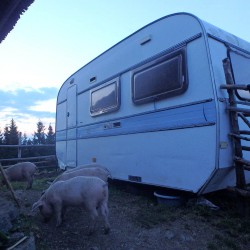 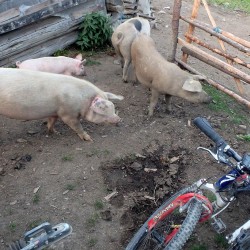 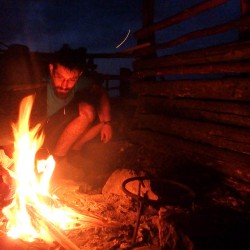 He didn’t get far with the cows. After the fourth one, he went to his trailer and collapsed to sleep. We didn’t know what to do with the water, so we also went to sleep. We got the other bed in the trailer. It was quite comfortable, despite being a little cramped. The pigs outside rocked us to sleep. Literally – they enjoyed scratching their backs on the trailer hitch. All night long, probably taking turns.

Sunday. Started the ride at 6 AM. We really wanted to catch the 2 PM train, as the other option was a night train. 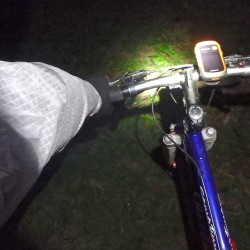 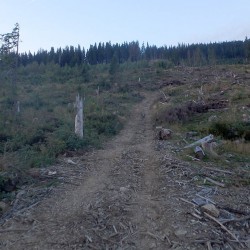 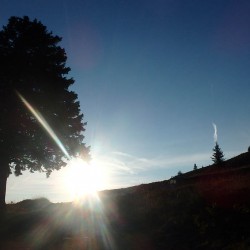 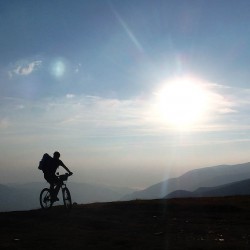 Climbed up to the Capatanii Ridge road, which was unexpectedly good. Weird feeling finding such a highway at 1900 meters elevation. 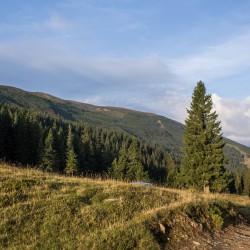 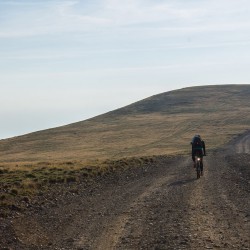 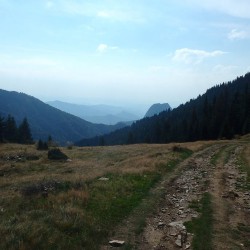 The landscape rushed by fast in front of us. Descended around Buila Vanturarita western edge. After many steep switch backs through the forest and a seemingly endless dirt road, we finally reached pavement. Sped towards Ramnicu Valcea, where we managed to catch the 2 PM train and even have time for lunch. 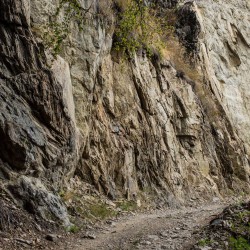 Going around… (photo by Alex) 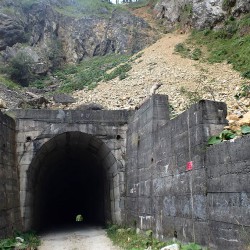 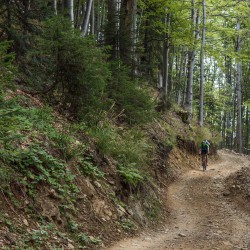 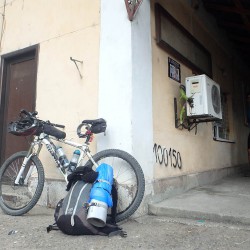 Ate at the most convenient place around, since it was just in front of the train station. Asked for a menu and the waitress said I don’t need one. They only serve the daily menu. Today they had meatball soup and chicken liver with mashed potatoes. Lucky me.. If it’s one thing I deeply hate, it’s liver. Haven’t eaten one in years (I can’t even remember, probably repressed memory). But I was starving, so I went for it. It was indeed horrible, but it got me through the 4 hour ride home.