Final day of my Tour du Mont Blanc. The route for today: a long 1400m descend, a 600m climb and then the final 600m descend into Chamonix Valley.

Will the MTB gods be good today as well? Apparently not. That long descend was first too steep, technical and rocky to be ridden. It then turned into a road (still steep and rocky, would be a difficult climb on a bike) and finally it even had a little singletrack, especially in and around the towns in the valley.

The final climb ended at the top of the bike park in Les Houches. Took the Alpage Respect trail down. Pretty steep, with some erosion in a few sections, but still doable. 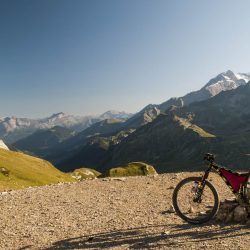 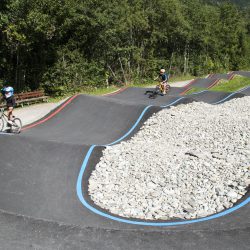 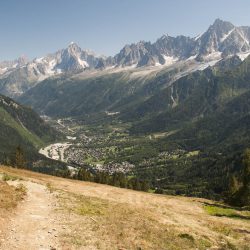 If Chamonix felt a little crowded when I arrived 5 days ago, it was now packed full. Wherever I looked, I could see trail runners. They’re quite easy to identify if you know what to look for: race t-shirts, trail running shoes (used ones, you don’t wear good shoes around town!), chiseled calves (or calves covered in compression gear), backpacks or bags from Hoka, La Sportiva or Salomon.

Returned to my hostel to find the room full of UTMB competitors. All of them serious, planning their gear and food, looking with dread over the weather forecast. I had a great week of hot sunny weather, but rain was expected in a few days.

After a supermarket, a curry and a shower, I was officially done with the TMB. So what did I feel in the end?

This was the buffer day in case of bad weather or technical issues. I chose to start it with some more bike park riding in Le Tour. Had to end this part a little earlier than expected since I used up my last set of disk brake pads. Went down the mountain looking for bike stores (which I easily found) and fixed the brakes. 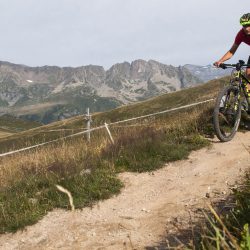 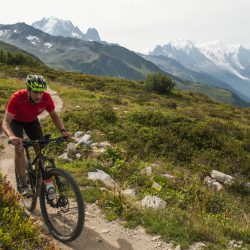 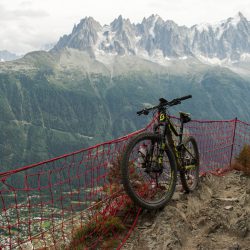 Continued with the trails of Petit Balcon Nord (nice singletrack when going downhill), followed by Petit Balcon Sud and finally the Pranplaz downhill. This was a technical trail (especially the upper part). Had to walk several sections, but overall it was worth it (even when considering the long push bike up to the trail head).

Just as I got into Chamonix, on the final stretch of biking after 6 full days, accelerating at a junction, I broke the chain. After almost 1900 km, after going through Colorado’s Rocky Mountains, Fagaras Mountains (and a few others in Romania) and now the Alps, that chain couldn’t have picked a better place to die on me. Walked to my hostel, packed Kenosha and my stuff and I was ready to go.

Going back to Romania. Looking over the past week – highways, trains, cable cars – I’m going to miss you, infrastructure!

The Geneva airport didn’t want to take my bike wrapped in foil. They said bike boxes are mandatory – and they can sell them for 20 CHF. But they only take cash and I only had EUR and RON. Found an ATM.. but, since I’m in Switzerland, land of the non-poor, the minimum withdrawal was 50 CHF. That was one expensive piece of cardboard.

What I learned: biking the TMB in August is definitely something to avoid. The trails are very crowded. No fun walking your bike down an awesome trail because there’s a long queue of people climbing it.

So the most important choice you have to make when planning is between:

In the busy months of July and August it’s recommended to book your nights in advance. But, as I’ve mentioned several times already, it’s best to just avoid this interval altogether if you’re on a bike and just make do with the shorter colder days of September.