I don’t like running. I don’t get why others like it. I don’t. So the only effective way I’ve found of motivating myself to run is signing up for running contests. And this year’s first challenge was Brasov Marathon. 38 km long, with 1900m in climbing (although my GPS recorded 2200m) and with a good chunk on the ski slopes of Poiana Brasov.

I’ve prepared for this by trying to run on hills as much as possible. Since Bucharest is pretty flat, the best I’ve found is the bimonthly Romniceanu Stairs Run, with about 200m of climbing over 6 km. Adding to this a couple trail runs and the past ski touring season, I considered myself prepared.

Arrived in Brasov the evening before the race. Got to the technical discussion just as it was finishing. We still had time to register – yes, convinced Andreea to sign up for the 9 km race. I also met with Lucian Clinciu and bought a pair of Snowline spikes, for a worry free run on ice and snow.

The next morning we were at Sfatului Square at 7:40. Passed the equipment checkpoint and waited for the race to start, enjoying the mix of emotions. I didn’t set up any expectations. I decided to stop at times and enjoy the view or the end of a climb or the food at checkpoints, instead of giving it everything.

The first kilometers of the race took us up Tampa, passing just behind the big “Brasov” sign. As I didn’t have a clear strategy set up, I climbed faster than I should have for a race this long, under the pressure of all the runners around me. Not that I cared. I knew I was going too fast, struggling for air in the first few kilometers, with only 35 to go. “Jeez, should I perhaps take it slower?” was a thought that didn’t cross my mind. 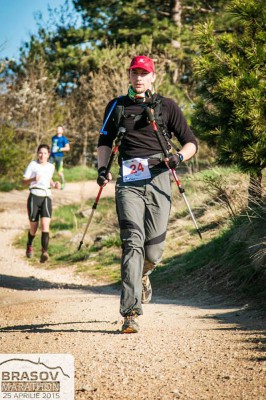 My course split from the 9k one and then from the 21k one. There were fewer and fewer people around me. Approaching the slopes of Postavaru, snow was becoming prevalent. Put the Snowlines on and stopped taking into consideration the risk of slipping. It felt good, especially when climbing on a few frozen sections, with others around me struggling for grip.

Got to Postavaru Peak. Gorgeous weather. Beautiful view. Sat down for 5 minutes, enjoying the moment, chatting with the volunteers there and eating a snack. Felt good to relax like this in the middle of the race, not caring as others overtook me. 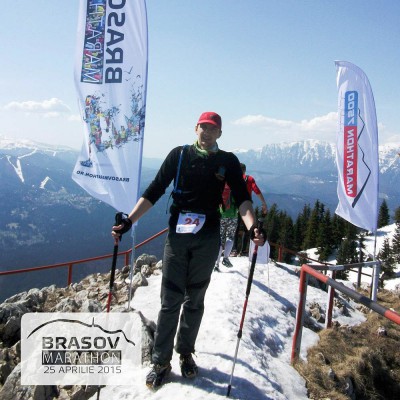 Ok, enought with the stops. Still about 22 km to go. Ran down the snowy slopes, overtaken by the occasional skier. Then it was back to the woods and trails around Brasov. 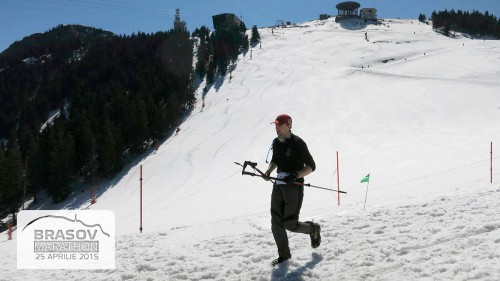 As expected, I had a physical breakdown in the last third of the race. This is the time where you stop running with your body and start running with your mind. Surprisingly, the body is extremely resourceful, it’s just your mind with the wrong idea that you can’t run anymore. I occupied my mind with 2 games here:
– the first one is called “See the guy in front of you? Overtake him!”; after you overtake somebody, you restart the game
– after getting bored of that or when there’s nobody in front, try running for 20 seconds and then resting for 10; the idea here is to count as slowly as possible while running; bonus points for counting fractions: …18, 19, 19.5, 19.666, 19.95… 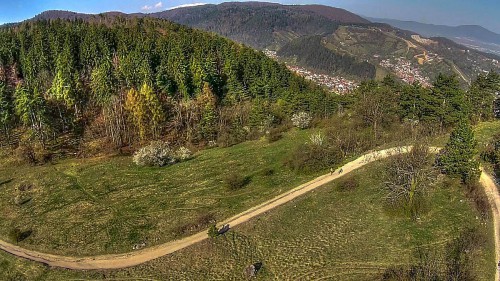 Finally, got to the finish line. Awesome atmosphere, with lots of people cheering, even though I was well in the second half of the ranking. Finished in a little under 6h30′, 30 minutes better than last year’s time at Ecomarathon. 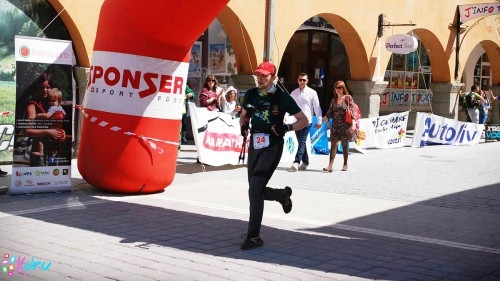 Overall, the guys from CPNT did a great job organizing this event. Perfect run for starting the season!