Continued on the Fagaras ridge and got to the tourist hot point: the Vistea and Moldoveanu peaks. Moldoveanu is the highest in Romania (2544m) and is a short detour from the ridge trail. While short, it’s quite technical, so I was in for a 20 minute full body workout. 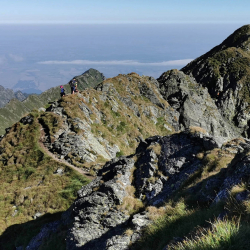 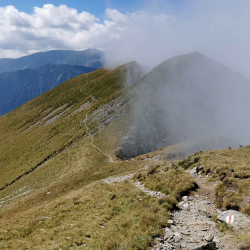 Continuing east, the trail becomes mellower and more deserted. Few tourists venture this far. While the views are less spectacular, I still enjoy how, whichever direction I look, I can only see rows upon rows of peaks and ridges.

After Ludisoru peak I turned south, down Mezea-Oticu ridge. It’s a rarely used trail, judging by the overgrown vegetation. The trail is easy to follow in good weather, but some parts may be harder to in case of low visibility. Slow going and a higher risk of twisting an ankle, but I made it through. Camped near its end, right on the trail, next to the only spring in the area. 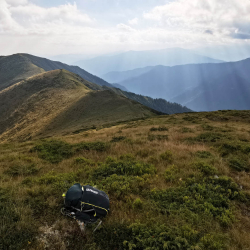 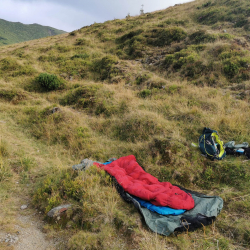 First half of the day was the Iezer-Papusa ridge traverse. These mountains are nice and all, but doing them in-between Fagaras and Piatra Craiului makes them the lamest in the group.

The final descent was on a trail that’s no longer maintained, but still exists on maps (so that people like me will have fun exploring).

Got to the far side of the little village called Satic (translates to Little Village). After several days at elevation, I was really feeling the heat. Would have liked a Coke or any other soda, but was unable to find anything for sale.

I filled my water bottles (4.5L capacity) at Cabana Valea lui Ivan and took on the ascent to Saua Funduri, the southern point of the Piatra Craiului ridge. The heavy backpack, the steep terrain and my desire for a Coke made the climb seem longer.

The Southern ridge was pretty nice (except for the complete lack of soda machines). Arrived at Saua Grind in good time and was able to enjoy a nice sunset along with some beef pasta and some pistachio. 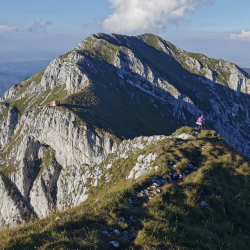 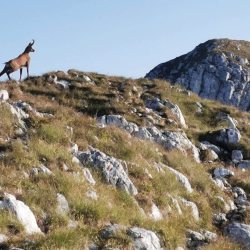 This felt like the hardest day. First, I’m tired. My feet are also taking their toll, with a couple blisters, a hurt toenail and some sore areas from dirt + constant rubbing.

It’s my second time camping in Saua Grind. I really like this place. The chamois are friendly and you can see them come real close. Shine a light at night and you’ll have their eyes shine back at you. You can see both the sunset and the sunrise. Nice view over Brasov. Good phone signal (I was coming after several days of no phone signal). Also, it’s really quiet when you’re alone. And there I was, just me and a group of 30-something people. Needless to say, I wasn’t able to get a lot of sleep, so I was up and on the trail quite early.

Finished most of the northern ridge and descended to Cabana Curmatura in time to catch breakfast (I learned earlier this summer that between 10 and 11:30ish they don’t serve food). Descended to Zarnesti, bus to Brasov, 1.5 liters of soda + some Chinese food, 3 hours of driving and I was back home. 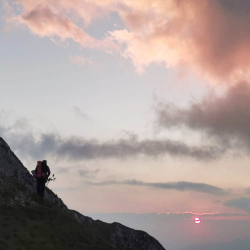 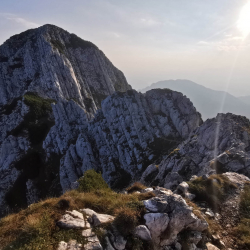 Love it when a plan comes together, right on track, no hiccups or issues. But that’s what planning’s for. My packlist is here. Things I learned: