Back in February, in the middle of the harsh Eastern European winter (which was actually quite nice and warm), I was in full planning mode. And after sorting out all logistical aspects, I finished booking everything for a 5 day hike/run on the GR20 trail in Corsica, in September.

Fast forward several months, a pandemic, widespread death and economical collapse and I had to cancel my original trip and find something fun to do nearby.

My new plan started with the Fagaras ridge, which is one of the best trails in Romania. I thought it would be cool to end with the Piatra Craiului Ridge, also one of the best trails in Romania (at least the northern half, since I haven’t done the southern one yet). I connected them by going over the Mezea-Oticu and Iezer-Papusa ridges. In total it would be around 140 km with 11000 meters of elevation.

Weather is quite important, especially when I don’t have flexibility in my schedule. With the exception of the first day, I was expecting dry and sunny weather.

I was arriving in Podu Olt at 3:15 PM and had to make good use of the remaining daylight, as I was estimating up to 6 hours to get to Avrig Lake (with the sun setting at 8:20).

The forecast was spot on, at least when it came to the rain. At around 4 pm the rain started and it died out at around 6, right as forecasted. But those weather models missed an important detail for me: wind speed. Can’t believe how cold it can get when you combine strong winds, rain and low temperatures. 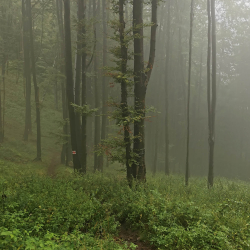 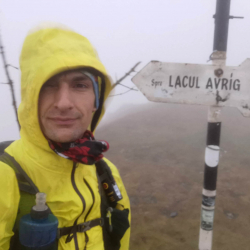 Made it to Avrig Lake at a little past eight. My original plan was to set up the tent, do a little stretching, cook food, wash and go to sleep. But first I missed the spring on the descent and then had to lose time and find another water source. Setting up the tent took ages, given the strong wind. Cooking food took a lot more than expected, with both my lighters refusing to work (luckily there was another group camping nearby and they gave me their lighter). By the end of these, I was shivering uncontrollably and I went straight inside my sleeping bag. Washing.. yeah right! Stretching and cooling down – funny!

The wind continued into the night, along with the occasional rain. My tent was flapping like crazy. But inside my warm sleeping bag, I was good.

Good morning, sunny blue skies. Now that’s more like it. Packed my stuff and went off at a leisurely 8:30 am. 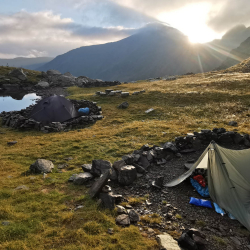 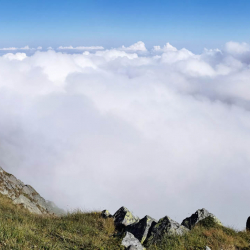 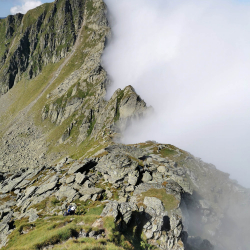 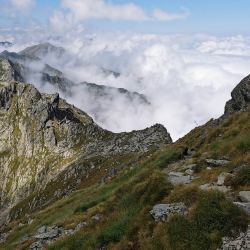 The highlight of the day was Custura Saratii. A ragged steep technical ridge, equipped with a bunch of chains so it’s only very difficult instead of crazy.

Stopped for supplies at Balea Lake. I was planning to get around 3500 kcal here, something like a kilogram of food. I was hoping to find biscuits and croissants, like in any small convenience store. But noooo! The selection was quite poor. Bought a kurtos kalac (yummy), a couple nutbars (ok) and some nougat and similar bars (yuck). I think I ate one of these throughout the next days and returned home with the rest.

My destination for the day was Podragu Chalet. Arrived there at 6:30, completing a 10 hour day. Ate every item from their menu twice – they were only serving pilaf.

The chalet was quite nice, especially given the elevation. But the lady in charge.. not so much. When ordering food, I asked if they serve any dessert. “Sure”, she said, “pancakes”. “I’ll have one, please”. She served me the pilaf and said to come later for the pancakes. 10 minutes later and I was back: “I came for the pancakes”. She said nothing, but went back. I continued waiting there, which is usual as I’ve seen. 5 minutes and several clients later and she noticed me: “What are you waiting for?” “The pancakes..”. “Haha, I don’t serve pancakes. Do you think I have the time to cook them? I was kidding”. “..?!”

Today I was able to complete my post-run ritual: washed myself and my clothes, did a little bit of stretching, even saw some YouTube videos. Kidding, there’s no phone signal here. But I did watch a movie on my phone :). Finished the night with some night sky photography. 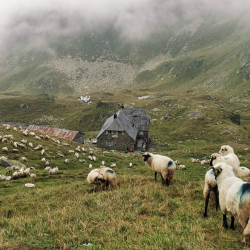 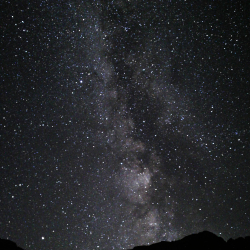