Woke up at 6 am. We were leaving Pokhara. As if they were saying goodbye, the mountains were again looming in the distance.

The bus ride was pure luxury – compared to our experience a week ago. We were descending from the Himalayan foothills (Pokhara being at 800 m) down to the flats that form Nepal’s south (with altitudes under 200 m).

At first, the road was winding and twisting like the rivers creating this terrain. Drivers overtaking others didn’t mind the limited visibility. Just honk while passing and whoever might come on the opposite side will do his best to avoid you.

We finally got to lower areas. And then we saw it: the elusive Nepali straight road – the first we encountered here thus far. The bus managed to accelerate to a staggering 68 kmph. Engine roaring, windows vibrating, bodywork trembling like a China cabinet during an earthquake. I guess neither the bus not the road allowed for a higher speed.

After 150 km and 5 hours on the road, we arrived in the village of Sauraha. Sitting on the banks of the Rapti river, Sauraha is the main access point to Chitwan National Park.

Yet we didn’t care at all about any national parks, at least for now. It was noon and we were sitting in an oven, baking under the sun. The temperature outside was thirty something degrees, in the shade… what shade?

The bus left us someplace in the middle of nowhere. Just empty fields all around us. And, of course, lots of jeeps and vans, ready to take us to our destination, for a moderate fee. We preferred to walk.
“Taxi, sir. Taxi, sir.”
“No, thank you.”
“Taxi, sir!”
“No.”
“Is very hot. Long way. Taxi!”

We were the only ones to walk. Would have been a little weird, walking in this heat, at noon, in the middle of nowhere, if not for my GPS telling me our destination was a mere 500 m away.

We reached our hotel. Waited a couple of minutes in the sauna they referred to as reception. Sweat was dripping down my forehead while filling in the check in forms. Had lunch in the hotel’s restaurant, since that involved the least amount of walking outside. Ate while having a fan pointed straight towards me, at full power. Yet the constant stream of air only managed to annoy me by its inability to keep me cool.

Finished lunch fast and went with excitement to our room. Finally, the moment we’ve been waiting for. Locked the door, pulled the curtains and sprawled on the bed. And then we turned the AC on, full power. Blessed be thy cold air! 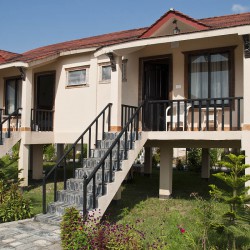 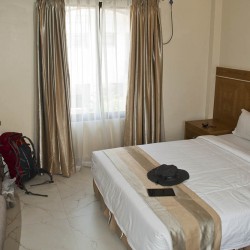 Zapping through the channels in the evening, came across the football match between Romania and Hungary. As expected from these two great teams, the most entertaining thing was how the English commentator pronounced Romanian names.

Sat indoor for most of the day. AC on. Curtains pulled to block out the sun. Unfortunately, we had to get out of the safety of our room around noon. We were hungry. 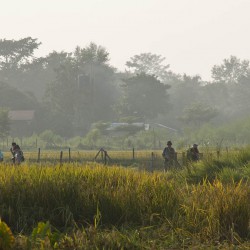 Went again outside at sunset. Weather much more manageable. Enjoyed the view over the Rapti river and the jungle south of it. 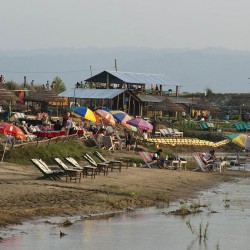 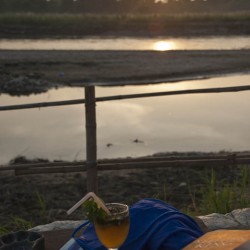 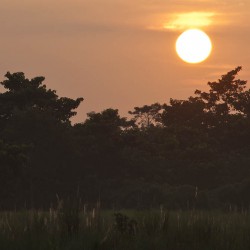 After a month of speaking English in Nepal, you end up making simple sentences, using mostly single syllable words. While it doesn’t become a problem, it’s still a little annoying, frustrating, funny. Tonight, we had a weird conversation with a waiter after he brought us the bill.
“Thank you”, I said while taking the bill.
“Yes, sir”.
Then he kept sitting there, next to us. It was creepy, so Andreea tried to make small talk, while I was sorting through the stack of Nepali bills.
“How do you say ‘thank you’ in your language?”
“Yes, thank you”
“No, how do YOU say ‘thank you’ in YOUR language?”
“Oh, yes, yes.. Language”
This wasn’t going anywhere. The waiter as well.
“What’s your name?” Andreea tried a different approach.
“Yes, sir”
“No, what is your NAME?”
“Ah, Raju”
“And how old are you?”
“Yes”
“No, how old, age?”
“Ah, 18, sir” and continued sitting there, waiting for us to pay, with a look of mixed politeness, puzzlement and simplemindedness.