We were in Sauraha, gateway to the jungles of Chitwan National Park. As much as we liked our room (and especially the AC in it), we did come here to see some wild animals in their natural habitat.

The park’s vegetation is partly subtropical forest, partly grassland. The fauna consists of tons of mammals, birds and reptiles. The largest and most important are: the Bengal tiger, the rhino, the Asian elephant and the sloth bear. Tigers are the stealthiest and very few people get to see one. Wild elephants are extremely rare. On the other hand, rhinos are frequently seen, so we were also hoping to see some.

There are several ways of seeing the park. By jeep is the laziest one. Yet, I don’t know how many animals you see and how much you can enjoy the sounds of the forest while in a car. Another option is by elephant. After an elephant ride in Thailand and seeing how these animals are treated, we’ve decided we no longer want to take part in such activities. So we opted for the third option. We signed up for a full day jungle walk. Hired 2 guides – you’re not allowed to enter the park with less. Also bought 2 permits. The total cost was about $60 for the both of us.

Woke up at 5:40. Dressed in long pants – didn’t want to get cut by sharp grass. Chose as much as possible dark colored clothes – better for camouflage. Also heard that rhinos have a thing with the color red, so we tried to avoid it – don’t know if it’s a myth or if it’s the contrast between red and green that helps the rhino see when charging. We were told rhinos are ill tempered and should be treated with caution.

Packed 4 l of water. Since we would be having lunch somewhere in the forest, we packed a bunch of cheese naan bread. Also took dried fruits, nuts, chocolate, the sorts.

The weather was cloudy, with a dull nonthreatening overcast sky. The temperature was pleasant and we were happy we wouldn’t have to endure the heat and sun from the previous two days.

We saw our first rhino without even starting the walk. We were at the southern edge of Sauraha, waiting to cross the Rapti river and enter the park. On the other side from us, a rhino was grazing. A couple of tourist groups were already in the area, checking it out from a safe distance. 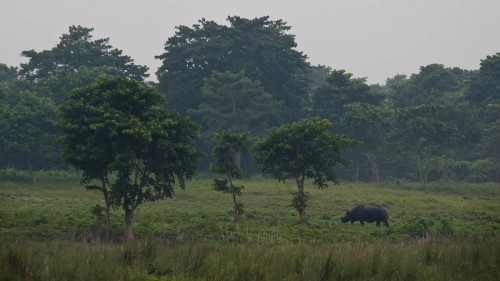 Crossed the river by dugout canoe. Carved from a single tree trunk, this kind of canoe is long and narrow. And, from our short ride today, it felt cramp and unstable. 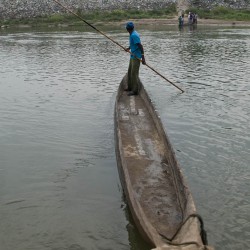 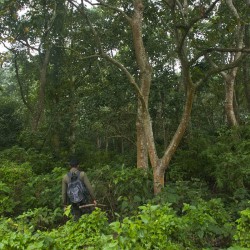 Walking through the forest, our guide looked right, then stopped. Pressing his right index finger over his lips, he signaled us to be silent. Less than 20 m away, in some bushes, a rhino was sleeping. We were moving in slow motion and almost keeping our breaths, trying to be as silent as possible. We were so close, it felt uneasy. I even looked around to see which trees were easier to climb, just in case. Then the guide’s phone rang. A silly pop ringtone. Like in a cheap comedy. The rhino was awake and looking our way. But it wasn’t in the mood of impaling humans, so it didn’t even sit up. Meanwhile, silently, we were already on our way.

The forest opened up into the grasslands. 3 m high elephant grass, stretching for miles. On a low ridge crossing this sea of green was our narrow trail. Every here and there, rhino tracks would be emerging from one side and descending into the other. 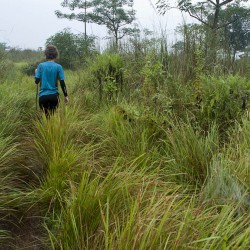 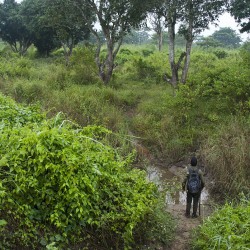 We stopped, silent. The guide pointed ahead. Rustle in the grass. One rhino appeared 50 m in front of us, crossing the ridge and disappearing on the other side. Then another rhino followed. Male and female, it’s the mating season now. 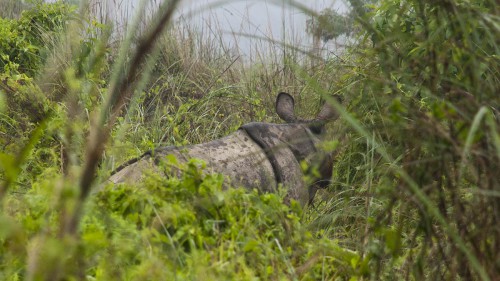 A while later, we again heard rustling. It was closer, maybe 10-15 m away. Everybody ducked to the ground. A rhino appeared from the grass. It saw us and froze. After the initial fright and a few seconds of pondering, it turned the other way and disappeared.

At times, the grass we were walking through was pretty tall, brushing our clothes and hands. And with those brushes came loads of leeches. Tiny little suckers, they would be waiting on grass tops, wiggling one end of their body in the air. I notice I don’t have any pictures of them. Probably because whenever I would see one clinging to my pants, I would be “EWWW GROSS!! GET IF OOOFF!!!”. We had one comfort though: the leeches didn’t get past our pants. We met an Israeli who had a blood stained shirt. A couple of leeches got to his waist without him noticing. Creepy crawlies! 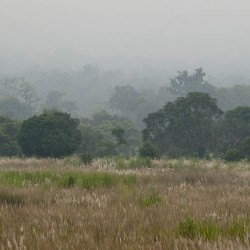 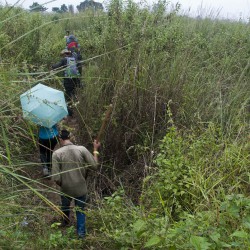 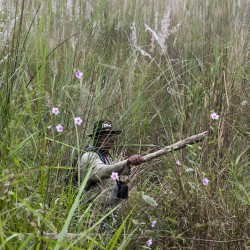 While cloudy, it didn’t rain this far. And then it did. Just a soft rain, but depressing in its continuity. It was taking a toll on our morale.

Walking through the grassland, we heard a bubbling sound. Our guide went around to check it out. Shortly after, he returned and took us with him. Silently, we approached a river bed. In the water, a rhino was chilling. Almost completely under, just the tip of its head, the eyes and the horn showing, he was exhaling and creating that bubbling sound. His ears were rotating in all directions, continuously scanning the area.
“This guy, we know. Big male, strong and dangerous” the guide whispered. 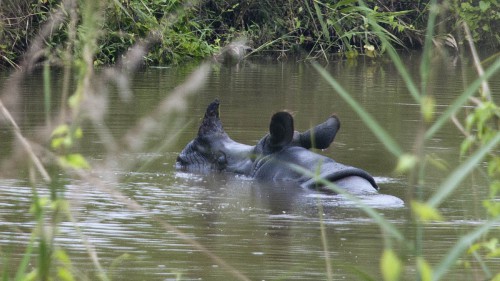 For the rest of the day though, the only wildlife we saw was a bunch of birds, including a few peacocks, and a ton of leeches. I was glad none of them was getting past my pants, although I can’t say peeling them off was an activity I enjoyed. And then I saw the blood stain on my socks. Took them off and peeled one feeding leech. I had another 2 bites. Andreea’s count was still zero.

Stopped for lunch in a jungle camp. Government workers temporarily live here, while taking care of the roads and trails through the park. I don’t think you can get something more basic than this. A tent and a simple foam sleeping mat are luxurious compared to a branch shelter and a straw bed. 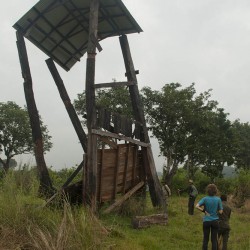 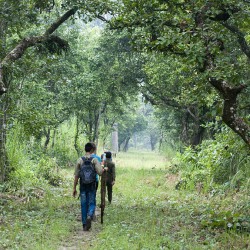 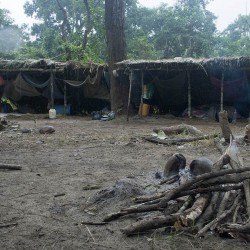 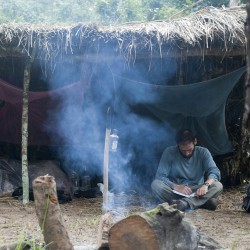 The guy with leech problems

Went searching for a tiger. Without luck. We knew our chances of seeing one were extremely thin. Our guide, in 7 years of work, saw tigers 5 times. At least we saw a lot of tiger footprints, some of them just a few hours old. 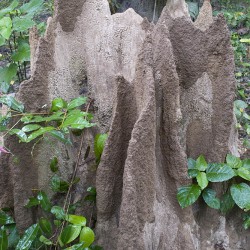 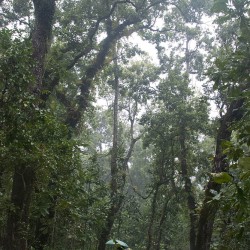 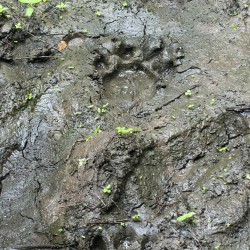 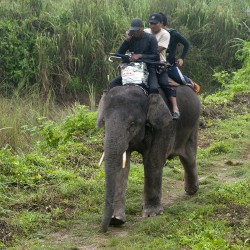 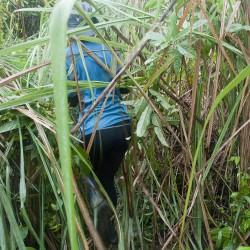 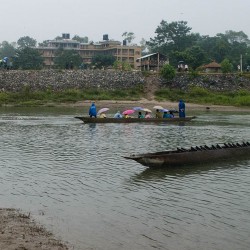 The walk ended at 5 pm, after over 10 hours. We were wet and dirty, hungry and exhausted. Took a hot shower, ordered room service, slept.