Today was our last day in Chitwan. We were hoping for better weather and booked a dugout canoe ride in the morning.

But the weather got worse. It was raining so hard, it didn’t seem real. It was ridiculous. We still decided to go with the canoe, as we didn’t have the possibility to postpone. It’s only water, I thought. Like taking a shower. Just colder, longer and dirtier.

The trip started with a horse cart ride to the boat pier. I guess foreigners dig this. Horse carts are still common in Romania though, so the only new thing for us was how the poor horse was primmed, with something that looked like a dust brush on its head. 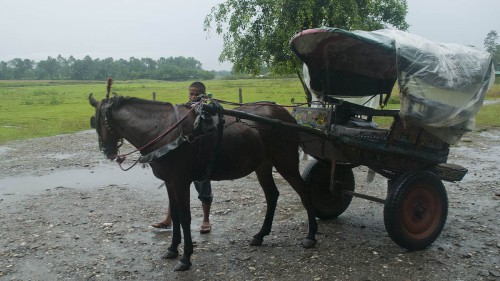 Rode through a traditional Tharu village. Tharu are the native people of the area. Their houses looked made from sticks and dirt or clay. They looked very clean, so I think they rebuild them after every rainy season. After the houses decompose in the wetness.

Arrived at the boat pier. Waited a little, hoping for a break in the rain. It only got worse. Eventually, we built our courage and stepped into the rain. The boatman took out the rainwater that gathered in the canoe. Then we hopped in, sitting on tiny chairs. The canoe was narrow and felt unstable. Any arm movement from the passengers would have it wobbling in the water. I was sitting tense, shifting my torso to counteract the wobbling, legs pressing against the sides of the boat. 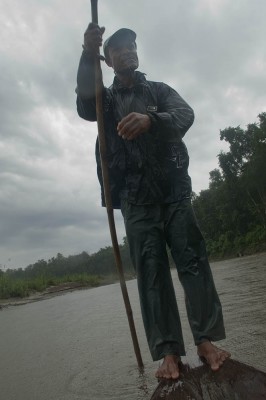 I was dressed in a biking rain jacket. It didn’t have a hood, so I also wore a hiking hat. Together, they were offering me some protection. But I had no rain pants. My shorts got wet the instant I stepped in the rain. My boots were waterproof – but it didn’t matter, as water was streaming from my legs and collecting into them. As this was not enough, water collected in the cannot as well. Soon, my boots and my but were sitting in a murky puddle.

The highlight of these canoe trips were crocodiles. Obviously, we didn’t see any. They only come out when basking in the sun.

Still, we did enjoy the scenery of the river and the forests. Halfway during the ride, the rain paused, allowing me to grab a few photos. 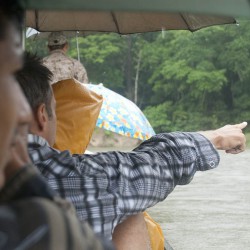 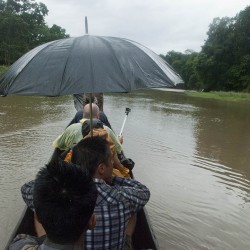 The canoe stopped near the elephant breeding center. While hearing about this place, I imagined some sort of semi-wilderness, where big mama elephants live joyfully surrounded by little baby elephants running around. Wow, was I in for a shock! Each elephant had about a 2 m wide area for moving, limited by a short chain tied to one of its legs. That was barely enough for it to step once. Most elephants were bobbing their heads up and down, absently. They looked retarded. I guess I would be the same if my whole universe was defined by a 2 m long chain. 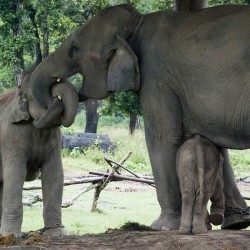 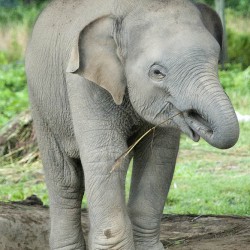 Little elephant with a little chain

Spent the rest of the day in our room, thinking of creative ways to dry our stuff, while outside it continued pouring.

During the evening, went to a Tharu dance show. Had a local kid buy us tickets. We would be paying the same if we bought them ourselves (100 rupee or ~$1 each), but he gets a 20 rupee commission. Also asked him to buy us bananas. We would get a dozen for 100 rupee. He got them for 60, so we split the difference.

The dance hall was a dark damp room. Found some seats in front. They were still free because a puddle formed there, so we were sitting with our feet in the water – not a problem for us. Update: Andreea wants a correction here. She was scared of rats. I was ok with rats. Rats are cute. 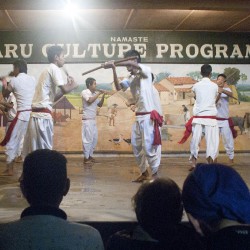 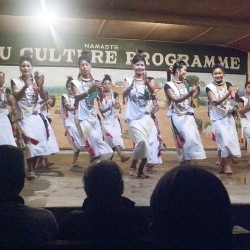 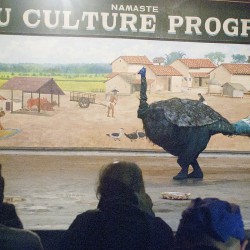