Today we left Chitwan. The alarm was set at 7 am. Yet we were woken up at around 6. A bunch of annoying birds were chirping like crazy just outside our window. The weather was gorgeous. Finally the rain stopped. Extraordinary visibility allowed us to see mountain peaks one hundred km away. 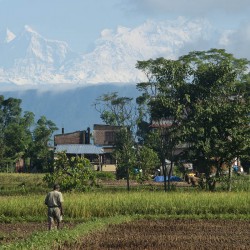 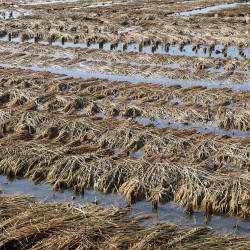 With all these winding roads, sometimes people get car sick. But Nepali buses are prepared! At the beginning of each trip, somebody hands out plastic bags. A girl in front of us got sick. Used one of the bags, then threw it out the window. The bag fell with a splash. Then she used another one and threw it as well. Washed her mouth with water and spit it out the window.

Overtaking here is interesting. In normal countries, overtaking on winding one lane roads would be both impossible and forbidden. But here drivers just go for it. Visibility? Who needs it? They just honk to let others know they’re coming. Whoever might be on the other side is supposed to slow down and wait. I’ve even seen our bus driver completely stop in order to allow somebody to finish his maneuver. And he didn’t curse or anything – it was just normal.

Checked into our last room. Booked it a few days in advance, as we didn’t want to spend time searching for a room by foot. Paid $20 per night. When we entered the room, we noticed the bed had no sheets, but there was a pile of sheets on a chair. Probably from the previous guest. Two ladies came and prepared the bed. Used the same sheets. They were done in 30 seconds.

As usual, the power was out.

This last day in Nepal was reserved for just walking around and exploring Kathmandu. We walked a little when we arrived here, in days 1-2, but we felt we didn’t see anything. We wanted a little more background on the places around us, so we followed a walking tour from the Lonely Planet guide. 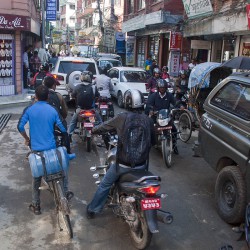 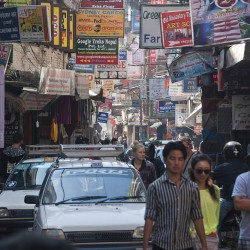 The busy streets of Thamel

The tour started in Thamel, Kathmandu’s tourist district. It took us on a small side alley – which we would never have noticed by ourselves. The alley opened up to a large square, having Kathesimbhu Stupa in it’s center. And a bunch of local kids scaring the pigeons.

Continuing with the tour, we stopped near a “Raj Dental Clinic” sign. Here, underneath the sign, discreetly placed between two stores, was a little Buddha statue. According to the guide, that statue is 1500 years old. 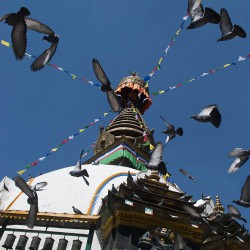 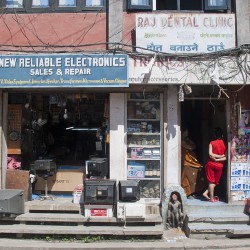 The area was full of dental clinics. Andreea was intrigued. It was indeed suspicious. Then we found the explanation in the guide. Nearby was a small shrine for the toothache god. Seriously, I’m not making this up.

Following the guide, we noticed a bunch of things that usually escape us. For example, we came to appreciate the intricate wood carved window frames: 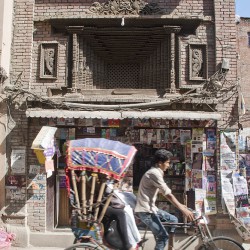 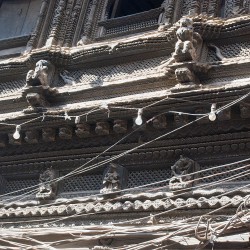 … or all the dusty old temples: 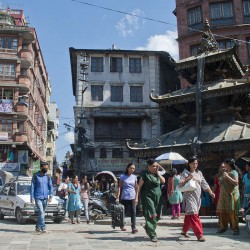 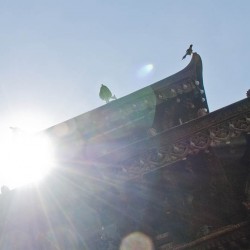 … or the various stores selling whatever: 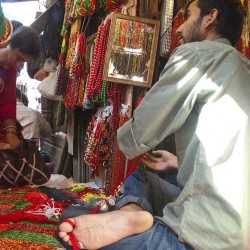 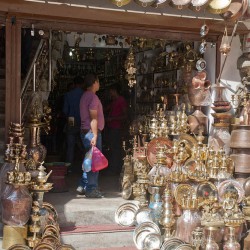 .. or the hidden squares with locals minding their own business: 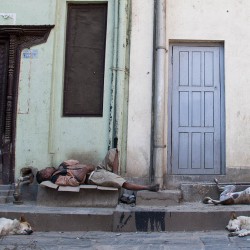 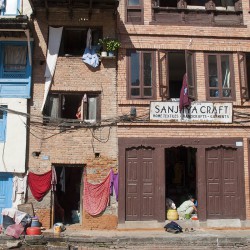 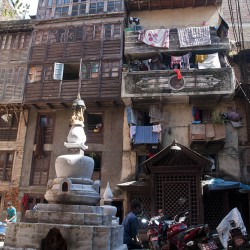 Being a tourist area, the streets are packed with guys asking for money in exchange for nothing useful:
– tiger balm sellers – definitely the most annoying. “Hello, tiger balm?” “No” “Tiger balm, one for 200 rupees!” “No”. The guy continued following us: “One for 100 rupees”. We continued running away from him: “No”. “Two for 100 rupees, very cheap!”. We decided to ignore him. “Two for 90 rupees!” Then he gave up. For now. Several hours later, on our way back, he tried again.
– rickshaw and cab drivers.
– guides: after refusing one, he tried to convince us with “You don’t want me, but I want you”. We weren’t convinced.
– guys playing little violins.
– guys selling fruit.
– moms carrying infants, begging for money to buy milk. And they’re there for the whole day, everyday. Guess milk’s quite expensive.

Bought a bunch of souvenirs for home. Also needed a duffel bag in order to carry them as checked luggage, as our backpacks were carry on. Managed to get a high quality North Face bag, nice and sturdy. Paid only $5 for it.