Here are the fireworks: 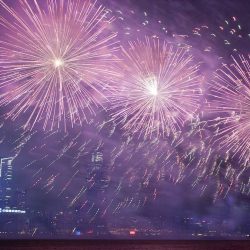 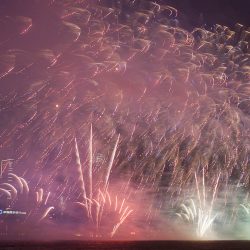 Now let’s talk about logistics. Since the fireworks are launched from barges in Victoria Harbour, you can see them from either the north (around Tsim Sha Tsui) or the south (Hong Kong Island). We read stories about hundreds of thousands of people crowding in Tsim Sha Tsui. Somebody even wrote how he arrived in the area at 10 pm, but was not able to make his way through the crowd and get to the harbor in time to catch the show.

We chose to go to Hong Kong Island, as we were told there would be smaller crowds there. In retrospect, I think the crowds are smaller because you have the famous HK skyline behind you, rather than in front. We left quite early (9 pm), taking the MTR to Tamar Park. Managed to catch good places and wheeze my tripod right in front. By 10 pm the platform was full. Around 10:30 platform access was cut off by the police. Some tips:
– come with a picnic attitude: bring a blanket, sleeping pad, warm clothes, stuff to drink and eat, maybe some games, whatever you would take on a picnic
– come early: for our location, 9 is OK, 10 is a maybe, 11 and you’d better watch the fireworks on TV
– buy all you need in advance; stores are closed in the evening
– try to not need the toilet 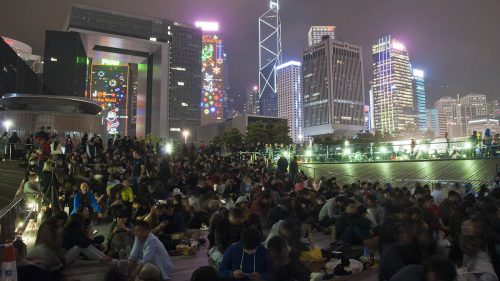 We talked about leaving right after the fireworks ended. Everybody thought the same. Front places for the show meant last places for the subway. There were thousands, maybe tens of thousands of people there. Still, it all went surprisingly well. After a few bottlenecks around staircases, we got to the platform and filled up an empty car. Passengers at the next station weren’t as fortunate. I don’t want to know how long the people gathered around Tsim Sha Tsui needed to get home. 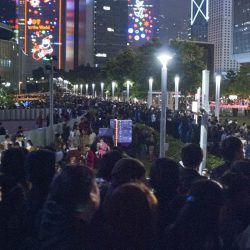 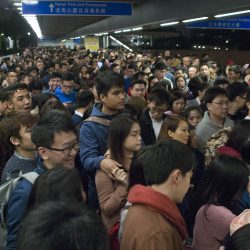