We were on the island of Phi Phi Don. Just a couple of km away lies the island of Phi Phi Lee, major tourist attraction after the movie The Beach got filmed there. In the movie, it was presented as a hidden paradise, a lagoon encircled by vertical cliffs, with a beach where you could live and forget about outside society. Obviously, Thai travel agents have continued to present Phi Phi Lee that way and you can find brochures with pristine photos everywhere.

We took a half-day tour from Phi Phi Don. There were tens of tourists on this tour. Each long tail boat fit about 20 of us. A swarm of boats left the pier. We were off conquering the beach by numbers! 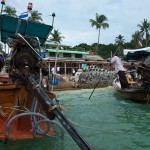 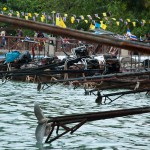 A long tail boat ride is by itself an experience, definitely not to be missed. The boat was bumping on waves, rocking wildly. The wind was driving the splashes towards us. There was no point in trying to stay dry. I was having trouble keeping my camera safe while also avoiding being thrown around.

Our first stop was Monkey Beach. The name is not metaphoric. It was a beach with monkeys on it. With a “Do not feed the monkeys” sign. Obviously, everybody was feeding them. The monkeys were used with the hundreds of people coming to see them each day. Most of them were peaceful – with an occasional monkey freaking out and jumping to scratch/bite people. 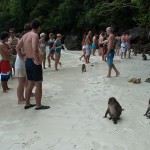 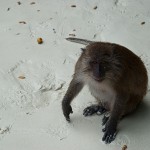 The boats then went around the island of Phi Phi Lee and we got to admire the vertical cliffs. It was an amazing sight. Steep walls rising out of the ocean, with bushes and even trees managing to grow in the most extreme places. 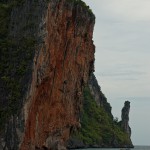 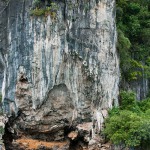 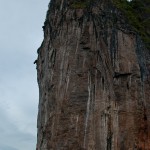 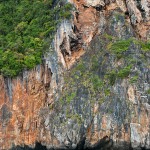 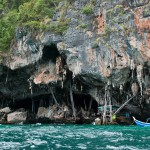 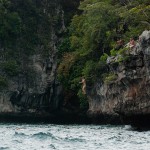 Finally, we got to an opening in the cliffs. We entered a golf and arrived at The Beach. Besides that opening, we were surrounded by cliffs on all sides. The beach was a wide stretch of sand, continuing with a tropical forest as the terrain rose.

This we all saw previously, in the brochures. What we didn’t see was that half the beach was used as a parking for all the long tail boats that took tourists here. And the other half was full of tourists taking “Look I’m rolling in sand” facebook photos. There was also a continuous background buzz from the arriving/departing boats. On top of that, we got the crappiest weather since we arrived in Thailand. Cloudy, windy, with a little rain, we ended up sitting submerged in the water – since it was warmer. 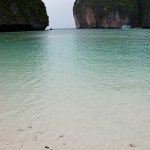 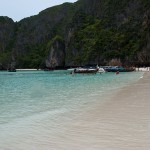 My tip to you, if you want to somewhat enjoy a tropical beach paradise, is to book your own boat and go in the early morning. It will be more expensive and there will certainly be other people there as well, but you will certainly have a different experience.