I was hearing a lot of good stuff about Retezat Sky Race (formerly known as Retezat Trail Race), so I signed up for this year’s edition. I managed to convince Tudor, a coworker, to sign up as well. This was his first time ever on a mountain!

Arrived at Cheile Butii, the starting place, Friday evening at about 9 pm. Missed the technical meeting, but were able to pick up the race kit and get some pasta. Camped out pretty close to the road, “enjoying” the sound of passing cars, with Tudor wondering about the chance of a car running over our tent.

Made it through the night without any car accidents though. As dawn broke, it started raining. I don’t mind the rain, but the amount of stupid jokes around the camp area (“Come out, the rain stopped! .. no, just kidding” followed by silly laugh) had me waking up with a cringe on my face. The major disadvantage of sleeping in a tent around other tents is you can hear everything – and I failed to bring my ear plugs.

Anyway, the race started. After a short flat section, we started the ascent through the forest. It stopped raining, but the previous days weather left a thick layer of mud. Relied a lot on my poles for balance and traction and finally made it out of the forest, into the alpine pastures and the thick clouds. The course, which was my number 1 reason for coming here, didn’t disappoint. A rocky section up to Peak Piule, followed by a steep muddy descent, then by another climb up to the 2457 m high Peak Custura and finishing with the icing on the cake, a massive 1500 m descent that left my quads burning in agony. Finished in 6h18′, which sounds like a lot given a course of only 28 km with 2300 m climb in climbing, but reducing the course to a couple of numbers doesn’t do it justice.

There was a moment in the race that I still remember vividly. We were approaching Custura, at that moment somewhere around 2200 m altitude. There was a stream of runners; I could see a couple of people ahead and a couple behind, everybody struggling on the rocky ground. Clouds were surrounding us, with visibility of less than 50 meters. Then there was a break. I looked somewhere below, 100-200 meters away, and I could see a pasture that looked like it was floating among the clouds. And on that pasture a bunch of horses were running like in an old Marlboro commercial. It felt surreal. I didn’t bother taking a photo. Instead of fumbling for my phone, I stopped, took a deep breath and enjoyed the moment. I would have probably wondered afterwards if this truly happened or the fatigue and lack of oxygen were playing tricks with my mind, if not for Dinu Turcanu to describe the same scene. 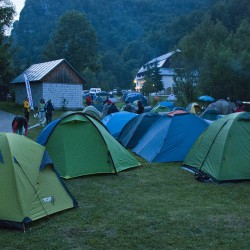 Set up the tent 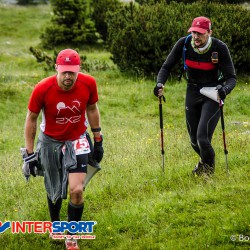 Up the first climb, one hour into the race 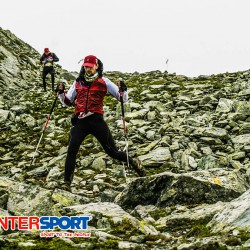 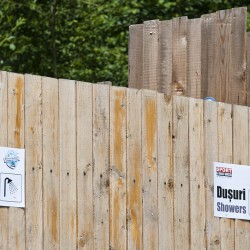 Having a shower in the afternoon sun 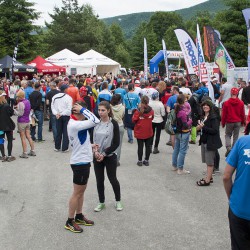 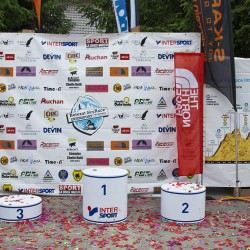 Podium area after the awards ceremony

For Sunday, I originally planned to go on the medium course (21 km, 1400 m climb), but I was not up for it – mentally. So I settled for the short one, 7 km, 300 m climb. Some would count this as a recovery run, but my quads were well past the point when this would help. I think the pain receded after 3-4 days, during which I was struggling even when sitting on a chair.