After years and years of workers installing new curbs for sidewalks (along with scandals involving suspiciously expensive stones sold by AND bought by Videanu, mayor of Bucharest at that time), I expected that chapter to be closed and money to be sent to other less important areas… for example education. So I was quite surprised to see a second row of stones sprouting on my street. 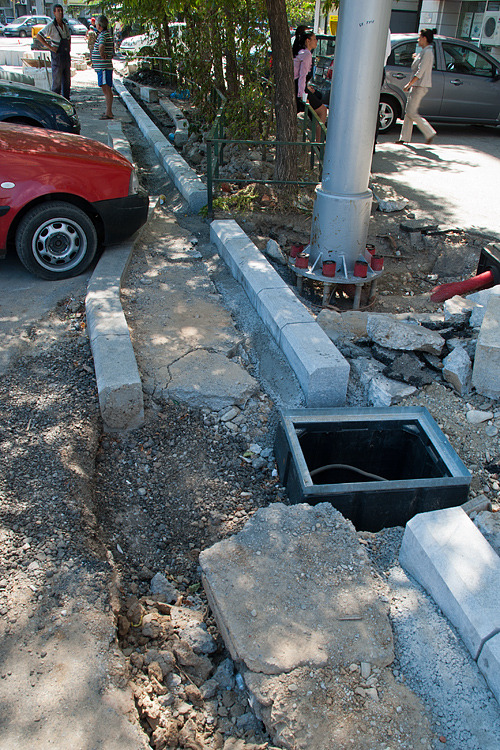 For people that are just starting to bike through the city, Bucharest traffic may seem like a nightmare. But it is not! After over one year of biking, I am starting to find the hidden patterns in this complex model. Let me give you an example. I was going down a street, picking up speed – something around 30 kmph. I was going on the right side of the road and I was approaching one of those vans that vacuum and wash the side of the road – where dust and leaves settle. Those vans are cool, but I don’t get their point in Bucharest – the right side of the road is where cars are parked.. all the time and on most streets. So cleaning the road underneath them is close to impossible. That’s why the van I was approaching wasn’t cleaning anything, just cruising around at around 15 kmph. I had to overtake it and I had two options: on its left or on its right. Normally, bikes overtake on the right, because.. um, we’re not allowed anywhere else except the right-most part of the road.

But then I noticed something peculiar: the cleaning van was signaling! That is strange, because in Bucharest you start signaling when you start turning the wheel (or even after – it’s accepted), while this van was still going forward. And then I made the necessary synapses and I understood: the van was signaling left, so it must be going right. I overtook on the left side (kids, don’t do this at home), while the van started steering right. If these guys come to Bucharest, I’ll totally pwn them: