This blog has been neglected for the past year due to… let’s say activity reprioritization. Or temporal resources deficit. Anyway, I’ll try to get up to date and I’ll start with this year’s epic adventure: doing the Tour du Mont Blanc (TMB) on a bike.

For whoever’s not familiar with the TMB (hi mom!), it’s a very popular hiking route going around the Mont Blanc massif. It crosses troix pays: France, Switzerland and Italy. It’s around 175 km with 8000 m of elevation gain.  For whoever has some mountain biking experience, doing 175/8 gives you an average of 22 km per 1000 meters of elevation (or an average gradient of just under 10%) – so you know it’s going to be gnarly. This route hosts the Ultra Trail du Mont Blanc – the most popular trail ultramarathon in the world. I arrived in the area at the end of August (a week before the race) and left just as the first of the UTMB races were starting.

I planned the route in 5 days. It looks like quelque chose that can be done in 4 days, but I planned 5 to have an easier pace and enjoy the views and the area. I also had an extra day in case of bad weather. I tried to bring as little gear as possible – only had a day pack (which included my DSLR) and a frame bag. I didn’t want to carry a tent+sleeping bag and relied on spending the nights and eating in alpine huts.

I’ll add the logistics/planning details in the final post of the series. This first post covers day 1 (and the day before it).

It’s only fitting I start my TMB adventure with a hike a bike from home to the bus station. Just a km away, but still far enough that I already got blisters from the new MTB shoes. It’s going to be a long week..

Didn’t manage to find a bike box, so I tried another approach at packing Kenosha. And guess what.. it didn’t fit through the X-ray machine at Otopeni Airport. Had to remove a wheel, then repack it. Good to know in the future.

Landed in Geneva with half an hour delay. Cinq minutes shy of missing my shuttle to Chamonix. Once there, I had to take care of some administrative tasks: 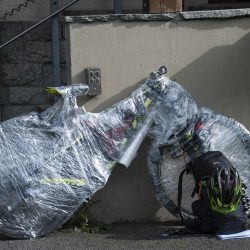 And that’s how Kenosha flew 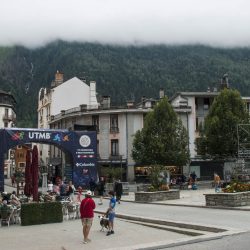 Chamonix getting ready for the UTMB

After going over the Chamonix valley bike map, I had a plan in place: 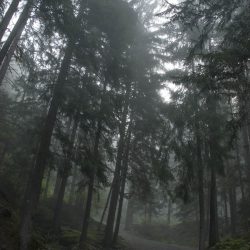 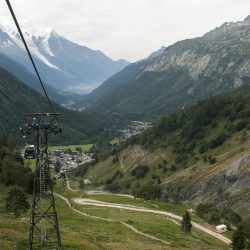 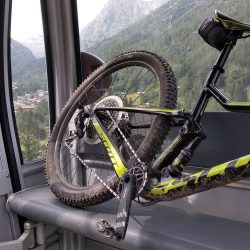 A day pass for riding your bike in Le Tour is just 23 eur. A bargain! Couldn’t help myself. So what do you get?

The trails in Le Tour are purpose built for biking. They’ve got drops, jumps and switchbacks. They’re not difficult and can be done even with a hardtail (but I wouldn’t understand a person that uses a hardtail in a bike park). I spent all afternoon riding in Le Tour. No, I didn’t get bored. 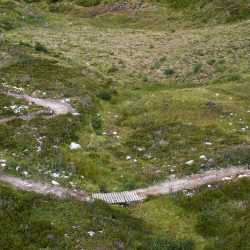 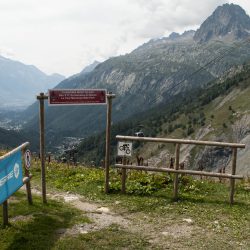 On the Vallorcine side, I started from the top with a trail that was at an easy enduro level. Afterwards I had to go down on some gravel roads (yuk) and finally managed to get on the downhill route (which was an easy one). This side of the mountain was wilder, more remote and the trail resembled those in Romania. So I just returned to Le Tour and the bike trails there.

The chairlifts closed at 5 pm and I made my way to the nearby Refuge du Col de Balme, where I just sat on a chair in the afternoon sun and enjoyed the warmth and the view towards Mont Blanc.

Le Refuge du Col de Balme (2190 m) est situé à la frontière avec la Suisse. Don’t be fooled by the name. This is not a mountain shelter, but a chalet, so they serve food. Unlike most Romanian chalets, they have running water and flushable toilest (just the shower was closed for renovation). 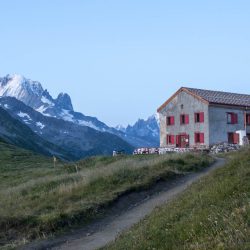 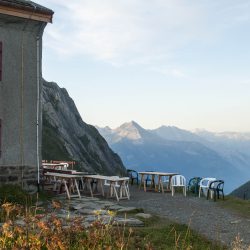 View towards the Swiss side 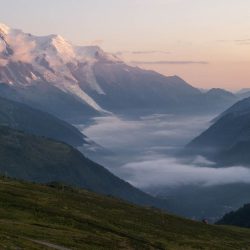 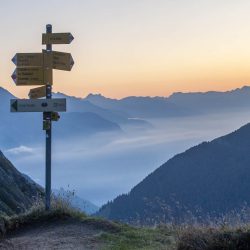 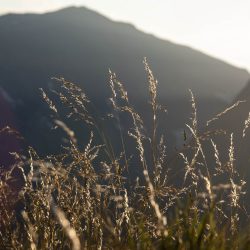 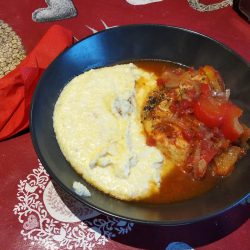 At 7 pm dinner was served. Cauliflower soup, followed by polenta with chicken and yogurt with chestnut cream.

Henry, the guy in charge of the refuge, is friendly. Il a dit que mon français est très bon, which is obviously not accurate. It’s his first year as a caretaker here and I can see the refuge is in the middle of renovation work.