Romania doesn’t have a lot of bike trails. If you’re mountain biking, you’ll be using:
– Unpaved roads. A lot of them were created to help in logging. How do you feel now, knowing you benefit from the country’s deforestation? They’re wide, boring, oftentimes crazy steep. Good for access to/from the mountain, but sad if they make up most of your trip.
– Hiking trails. They can be pretty awesome or you can end up climbing up some chains with your bike strapped to your pack – hard to know in advance if you only have a map of the area.

But there’s a third category, pretty rare in Romania: the bike trail. Its main advantages are the manageable climbs and the flowy banked turns, which allow you to ride fast and have fun. There are a few shorter bike trails near ski lifts (the one on Sorica Ridge in Azuga is really nice; the ones in Sinaia are too steep for my skills). But these pale in comparison to the tens and tens of kilometers of singletrack that form the Transylvania Bike Trails network.

So for my first and most likely last mountain bike ride of 2017 I headed for the village of Viscri. After 4 hours by train (Bucuresti – Rupea) and about 15 km of paved and then unpaved roads, we finally hit the trails. 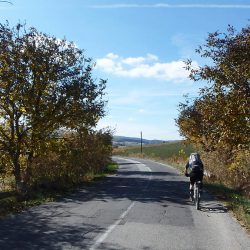 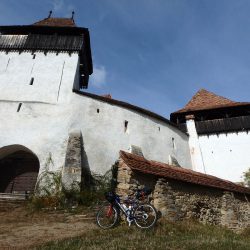 The Fortified Church of Viscri

The trails were pretty impressive. I can’t imagine the amount of effort they required. We’re talking about tens of kilometers of banked turns and crushed rock pushed into the ground. I’d say they’re appropriate for any level of bikers. They’re not steep, with switchbacks against any difficult slopes. They’re not technical, unless you want to catch a lot of speed, which the banked turns allow. 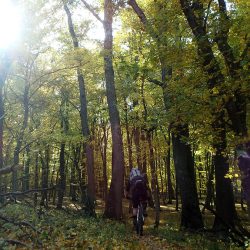 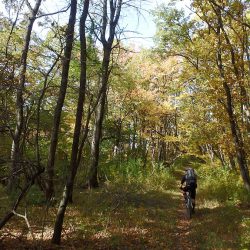 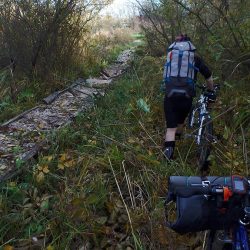 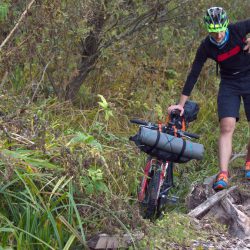 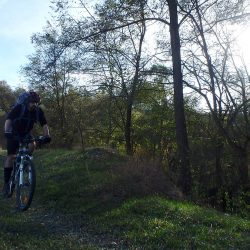 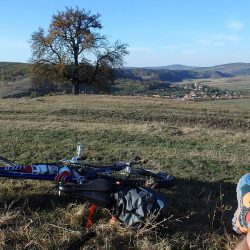 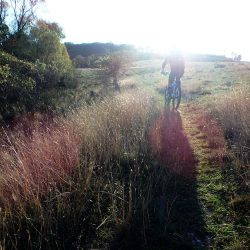 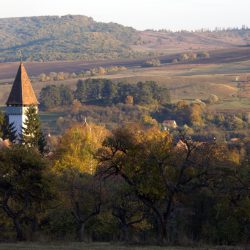 The villages along the way offer several options in terms of accommodations, convenience stores, attractions (fortified churches) and other activities. You can check a list of the attractions in the TBT Android app.

We finished our day in Mesendorf, where we found a good place to set up camp, with a nice view towards the fortified church. 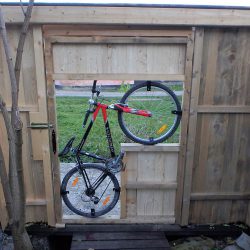 A gate on the trail, in Mesendorf 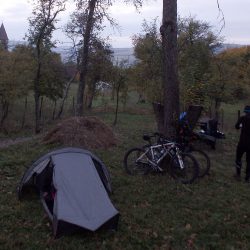 On Sunday we carried on with some very nice flowy trails. This is the area that hosts the yearly TBT Race. I still prefer it like this – riding in a small group, in cool temperatures, under the soothing sound of crushed autumn leaves.

We included a loop to Saschiz, mostly to replenish our water and food (we have previously visited the citadel there, so we skipped it this time). On the final kilometers towards Sighisoara, we had a hard time finding the trail and ended up on some unpaved roads instead. If you’re on the trail, it’s usually pretty easy to follow. But in some places, such as junctions, it helps to have a GPS with the trails loaded, so you know you’re riding the good stuff. 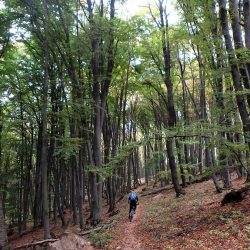 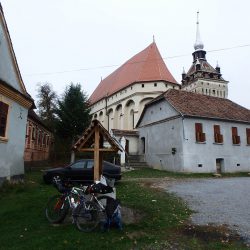 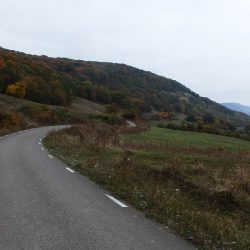 Overall, it was a great experience. I highly recommend the area and the trails. I hope tourism will continue developing here, because the region has a lot to offer.

One Reply to “Biking Transylvania’s Trails”