Today we left Costa Rica for Nicaragua. There are several ways to do this, main ones being bus and plane. We chose the cheaper one: bus. Again, there are two ways to do it: local buses or direct coach. The direct coach is about $29. We went with the local buses option and paid a total of $12.

We took the first bus from the Gran Terminal del Caribe in San jose, at 6 am. It was a standard coach, not a lot different than the direct one. This took us to the border crossing point, Penas Blancas. The 300 km drive took about 6 hours and mostly followed the Panamerican Highway. Doing the math, you might notice an average speed of 50 kmph. Having in many parts only two lanes, with a lot of going up and down (topical Costa Rican landscape) and lots of trucks and buses barely dragging themselves uphill (and impossible to overtake), you start to understand why this road requires patience.

Most of the drive was at low altitudes, under the scorching sun. There was no AC, but having the windows open while moving helped us not die. There were a few traffic jams though. Looking back, I’m just glad we made it through.

But finally we arrived at the border crossing. It was our first border crossing on foot. First, on the Costa Rican side, we paid an exit tax ($7 usd per person), then got the exit stamp in our passports.

Now we had to get to Nicaragua. We walked the 500 m or so between the two countries and entered the Nicaraguan immigrations building. Paid an entry tax of $12 and another $1 tax for something I didn’t understand (our Spanish is limited, while locals barely understood a couple of words in English). Got our bags scanned by xray and we were in! 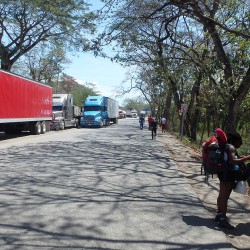 The no man’s land 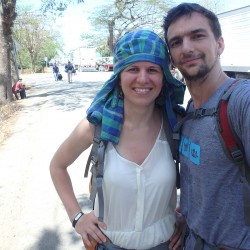 Crossing the border on foot

Getting out of the immigration building, we passed the swarm of cab drivers (“Taxi, senor?”, “Hey, where you going?”, …) and got to the local bus. There was a guy nearby that had an official looking badge and a stack of bills – he was the official money exchanger. We handed him our last collones and he gave us some cordobas instead – that’s how you exchange money in Nicaragua.

We boarded the bus, although it was more like a time machine. The tourist term for it is chicken bus, possibly because of how cramped it can be. It was an old American school bus – the one that is deemed expired in the States and gets then used in Latin America for a few more tens of years.

As the driver was waiting for more passengers, a lot of people selling cold drinks, doughnuts, popcorn and unidentified snacks were traversing the bus, mixed in-between travelers looking for seats and space for their luggage. Each one was shouting his offer. It was chaos. 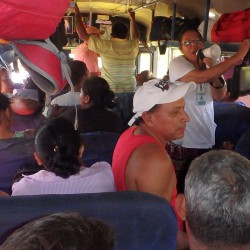 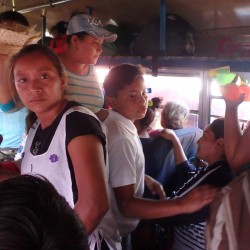 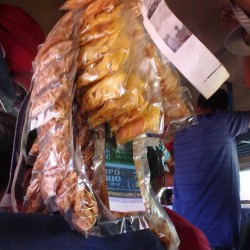 We went on our way, but each largish stop would have a new stream of people selling stuff. Then we got an old lady with a megaphone, preaching the Bible: “Jesús es nuestro Señor! Él te ama! Él te salvará!” Along those lines – you get the point. She was followed by a guy selling what seemed to be the cure for any health issue you have: extracts from the tree of life. After all those hours, the fatigue and the heat taking their toll, this all felt like some kind of real life absurd theater surreal dream psychedelic mushroom hallucination.

Got off the bus somewhere nearby Granada and waited for another bus to take us there. Didn’t wait long. A chicken bus briefly stopped in front of us, with a hyperactive guy hanging out the back door, waving one hand and shouting “Granada? Granada?”.