Buila has been on my todo list for a while and I’ve just gotten the opportunity to check it out. We weren’t in a hurry, so we planned for a relaxed two day trip, with a night camped out at Curmatura Builei. There’s also a chalet in the northern edge of the massif, but we didn’t escape Bucharest to sleep indoors.

We left the car in the village of Pietreni. Started the climb on a forest road that ended at a spring and shelter in Poiana Scarisoara. We were barely at 1000 meters altitude, it was pretty hot, so the cold spring water was more than welcome. We continued the climb up to a sheephold (altitude about 1250 meters). This is where we lost the markings. We asked the shepherd which way should we go and he simply pointed towards the most obvious route: straight up the mountain to the top. We were off the GPS track and there were no marking around, but the slope was anything but technical. Reaching the ridge, we also found the markings. 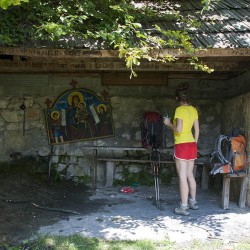 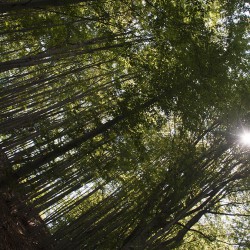 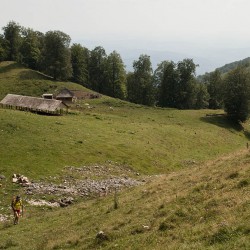 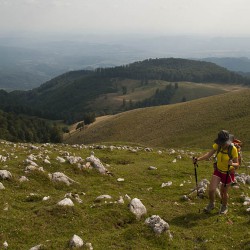 The trail continued on the southern Buila Ridge up to the top of Mount Piatra (about 1630 meters altitude). After a short descent and a very beautiful rocky section, we reached our stop for the night, Curmatura Builei (1560 meters). There’s a shelter there, along with a sheephold. There’s water 5 minutes away (at 1500 meters). 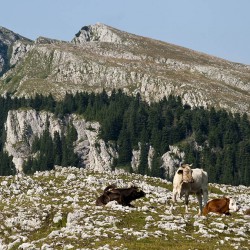 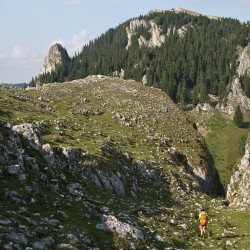 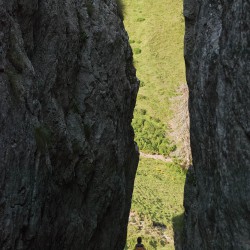 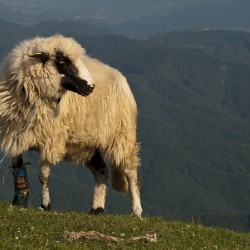 We started setting up the tent when we noticed the major problem with camping there: goat dropping everywhere! We looked around for a flat area with less than average goat poop, but found none. It was still a pretty cool camping place. Prepared dinner (careful not to place anything on the “grass”), then went to sleep.

As I was laying in the tent, I felt something sit down next to me, on the outside. A dog. First, assess the risk factor. The dog looked peaceful. It will probably not chew my leg off. Still, it was sitting uncomfortably close to me. Struggled a little and eventually managed to shoo it off. But not for long, as the dog decided to sleep in front of the tent. At first it was a little disturbing, but we eventually got used to it and actually felt a lot safer during the night. No fox will dare attack us! 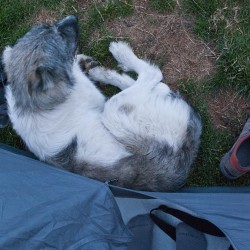 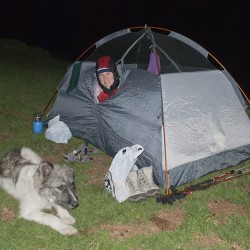 At about 10 or 11 PM we looked out. It was dark, clear starry sky, no moon. We could see far in the distance, with the valley pulsing with light. I did the best I could without a tripod. Managed this with my DSLR, a remote and a shutter speed of about 10 minutes: 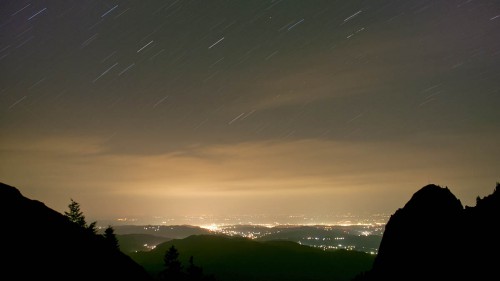 Sunday morning. 7 AM alarm. Shut it off and went back to sleep. I kinda remember waking up a couple of times even before that, with goats peeking into the tent, dogs fighting outside.

For today we had the northern part of the Buila Ridge. Left most of our stuff at the shelter and hiked to the highest point, Vanturarita Mare Peak (1885 meters). Had some spectacular views along the ridge. 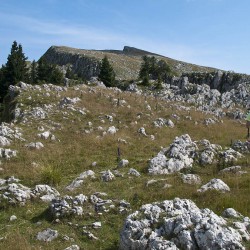 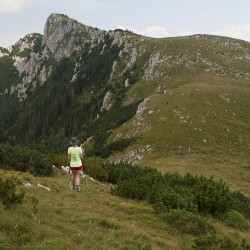 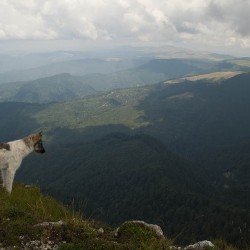 For the way back to the car we chose the route to Schitul Patrunsa. Lost the markings a couple of times and the GPS was of no use, with the OSM trail not matching the landscape. Still, we found our way on a very steep grassy descent. It was the sort of trail you cannot descend when wet and slippery. We had good weather, so it wasn’t dangerous, just slow and difficult. 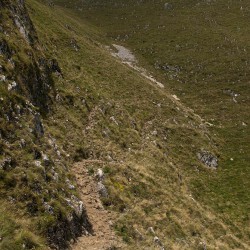 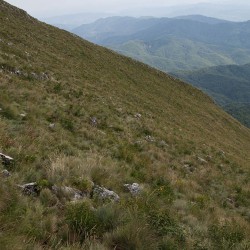 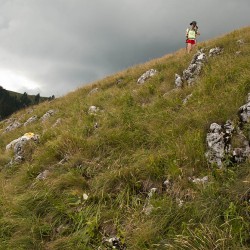 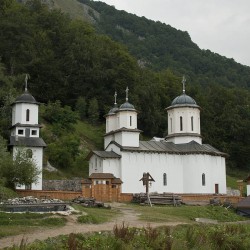 The rest of the trail was uneventful. A mostly flat forest trail followed by the road we used the previous day got us back to the car. Overall, Buila is a great getaway destination for a summer hike and camp underneath the stars.