Stopped for some hot food at Cabana Cerbul, near Minis Lake. They had little besides a wide variety of meat, so we had to make due with some fries. Moving back to biking, we continued with a section through the Cheile Nerei – Beusnita Natural Park. We had to cut it short here, as we still had a lot to cover.

Descended to the Village of Lapusnicu Mare, where we made a resupply stop at an old lady’s store. 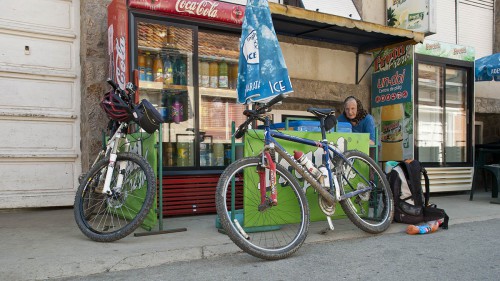 We were now in Tara Almajului, a remote rural area surrounded by mountains on all sides: Semenic to the north, Aninei to the west and Almajului (our destination for the day) to the south and east. I’m hoping to return here in the next few years, as this region has a lot to offer.

Had another stop in Sopotu Vechi, to refill our water bottles. With the heat, we were going through them pretty fast. Got some words of encouragement from the locals (“Are you sure you want to do this?”, “The roads there are pretty bad”, “You’ll get lost even with a GPS”, “Why not take the paved road?”).

Started climbing and eventually made it to one of the many ridges that make up this maze of a mountain. By that time though, we have been on the road for 12 hours and the sun was setting. We set camp on the only flat land available – the middle of the road. 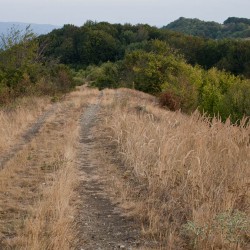 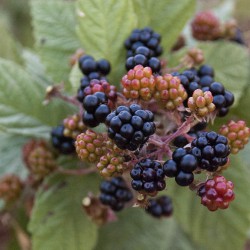 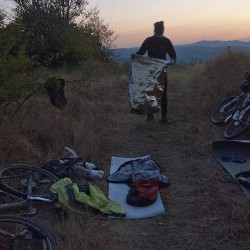 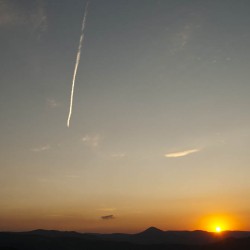 As morning came, we quickly packed and went on. We had a train to catch. But.. problem! We couldn’t find any trail matching the track we had. So we followed the road we were on, which, instead of descending, turned right and kept going on the ridge. We followed it while, slowly, it started fading and fading, until it finally disappeared and left us in the middle of an uncharted forest, many kilometers away from anything resembling civilization. And with less than a liter of water each.

The only sensible thing to do was go down towards the track we had on the GPS. Easier said than done. The bikes were a pain to get through the bushes. The terrain was getting steeper and steeper. We started seeing the valley bellow. But then Alex slipped and slid alongside his bike to the bottom. Luckily, the ground was soft and there were no big rocks where he stopped. 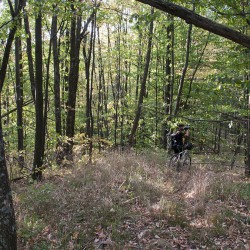 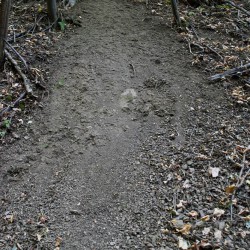 There was a little stream trickling down the valley. Refilled our bottles and used some iodine drops to make the murky water safe for drinking. 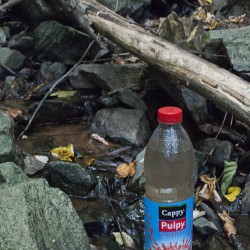 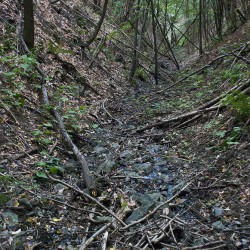 Continued down the valley at a slow pace, battling with the terrain. Went on like this for what felt like ages. We joined the GPS track, but the only thing that changed was the volume of the stream – now a lot bigger. Crossed tens of patches of stinging nettles, jumped over rocks and fallen trees while carrying our bikes, got knee deep in water several times. Eventually we started seeing signs of what looked like a road. Slowly but surely, the road appeared and we got on our bikes again. 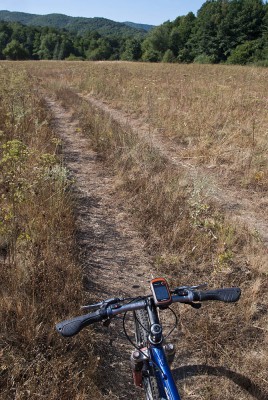 Climbed to the village of Bigar and arrived there just before noon. All the stores (both of them) were closed – the villagers were attending Sunday mass. We ate whatever we had left and we had to make a choice. With only 5 hours left until the train departed Orsova, do we go on the unknown but shorter offroad track or do we take the longer but more predictable paved road? I pleaded for the paved one and off we went. Although relatively flat, we still had to cover 80 km in 5 hours, on mountain bikes, during the middle of the day, during a heatwave, while hungry and tired.

We gave it all we had. At some times, I felt we were not going to make it. Luckily though, we managed to keep a good speed despite the heat and fatigue. We made it to the train station with just about 20 minutes to spare.

The train ticket was only 75 RON for me and half more for the bike. The lady at the ticketing office tried to excuse herself for the prices. She said she had issued bike tickets for this train (which are 10 RON), but afterwards she had been fined by the management. The guy checking the tickets excused himself as well. He had been also fined for something similar. It seems CFR really hates bikes.